Using Zabbix to Monitor Apache Ignite or Other Distributed Systems

Guidelines for building a monitoring system:

Using these guidelines, we will create a template and configure monitoring for the test cluster. The resulting template is available in the Zabbix repository.

To build your dream monitoring system, you need a good understanding of the product that you want to track and evaluate.

Apache Ignite is an in-memory computing platform that is used as a cache, a distributed computing system, and a database. To learn about Apache Ignite, see the official documentation. The key external indicators (KPIs) of system performance constitute a relatively standard set:

Zabbix contains templates for monitoring these metrics and for monitoring extended metrics, like disc utilization. Also, ready-made solutions are available in the Zabbix repository; for example, a template for monitoring a Linux disk is available.

For distributed systems, external indicators identify problems after incidents occur; for example, after a hardware failure or after the system becomes unavailable. To identify potential problems (before an incident occurs), internal indicators are needed. At the time of this writing, there are no ready-made, internal-indicator templates for Apache Ignite, so we will write our own internal-indicator templates.

Because Apache Ignite is written in Java, JMX will be our primary monitoring method. When we download and run Apache Ignite, the JMX port opens on the first free port between 49112 and 65535. For monitoring, this approach is not appropriate because, typically, the port is configured in advance and cannot be detected automatically. When you familiarize yourself with the startup script, it becomes clear that, to specify the required port, you use the IGNITE_JMX_PORT environment variable (for Ignite versions earlier than 2.l0) or the IGNITE_JMX_PORT (for Ignite versions 2.10 and later). Thus, by running the command export IGNITE_JMX_PORT=49112, you open jmx-port as follows:

After the node starts, we can access the JMX on the static port that we specified.

Now, knowing the port, we can use the standard JDK tool (jconsole) to connect to the application and see what is inside. Almost all metrics and objects provide descriptions of what they do.

The feature that needs our attention is that, by default, the path to mbean contains a classloader that changes after each restart on the node. This feature allows several Ignite instances to be started within one JVM and, thus, avoids metrics conflicts. However, because ot the autogenerated classloader, Zabbix detects the metrics after each restart. We can solve this problem by adding the JMX option -DIGNITE_MBEAN_APPEND_CLASS_LOADER_ID=false. This option removes the classloader from the path.

Apache Ignite is open-source software. So if you think that some functionality should work differently, you can participate in development. I have created the task in Apache Ignite JIRA.

When the classloader is removed from the path and the node is started, the metric tree looks like the following: 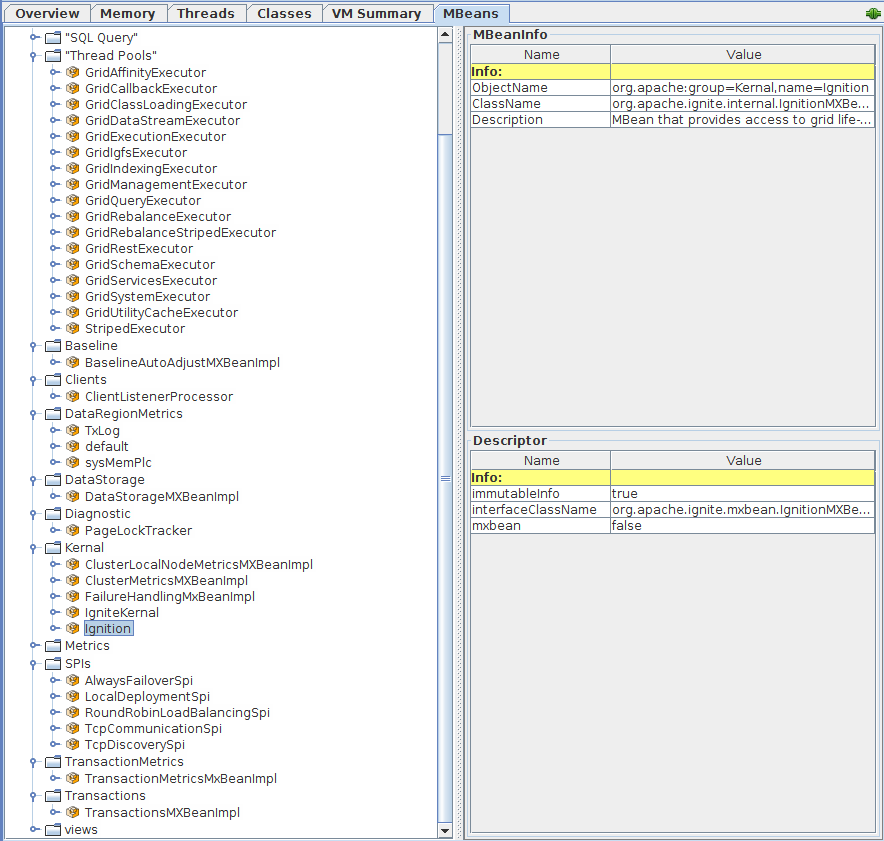 To facilitate the process of adding and changing metrics, we first determine which objects have similar entities. In Java, this task is usually accomplished via an interface implementation. In our case, when you examine, for example, metrics in the section IThread pool, you see that all objects implement the ThreadPoolMXBean interface.

The fact that most interests us is that each object has one basic set of metrics. Therefore, In regard to Zabbix templates, we can configure a discovery rule for the metrics. Then, based on our rule, the monitoring server detects all identical objects and applies the template to them.
For example, a rule to find all instances of dataRegion looks like the following:

Zabbix sets the value of : to the address at which the host is available, the template is applied, and the number of the JMX port is specified.

If it becomes necessary to debug the JMX discovery, you can use the zabbix_get command. For example, you issue the following request:

An example of a metric template:

I have identified several metric groups for which the discovery mechanism should be used:

The rest of the metrics, such as current coordinator, the number of client and server nodes, and the number of transactions on the node, are inserted into a separate group.

Now that we have all the necessary templates and understand how the product works, we will configure and test a monitoring system for appliances or applications. We will use Docker for process isolation.

How the process works:

Metrics from the application are received via JMX, and new nodes are registered after the first call from the Zabbix agent to the server

Details about why a self-written script is used in step 2:

How to install Ignite and Zabbix:

Now Zabbix is available on port 80. The default account is Admin / zabbix.
How to import templates:

How to create a script for agent autoregistration:

The script adds the JMX port to the settings and applies the templates from the specified group to the passed node. For developers who deploy a test cluster from the image, it is located in the /var/lib/Zabbix folder. For developers who install Zabbix and Ignite on their own, script is located in the same repository. In my case, it runs by the command php /var/lib/zabbix/autoreg.php 'Templates/Ignite autoregistration' ''. It should look like the following: 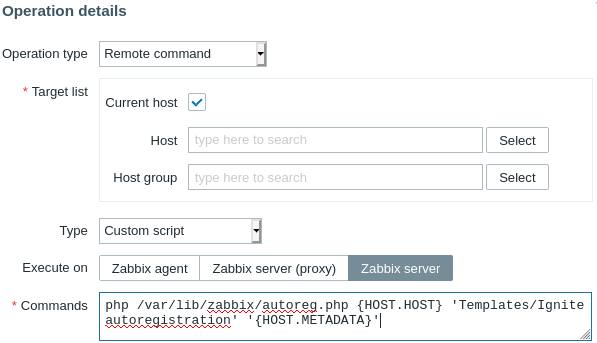 If everything was done correctly, the nodes appear in Zabbix, with the configured jmx port and the applied templates from the group. If something went wrong, check the Reports-> Audit log.

Results and Where to Go Next

When you organize monitoring, you can choose between the redundancy of the metrics and the performance of the product and monitoring system. We created a two-node cluster with monitoring that suffices for using Apache Ignite on a production cluster.

You must keep the monitoring up to date. If the current configuration is unable to prevent an emergency, you must add metrics. Also, as a best practice, you should occasionally remove unused metrics. Removals decrease the load on the monitoring system, applications, and hardware.

In addition to Apache Ignite, your solution will probably contain various other components, such as client applications, frontends, queues, network equipment, and DSS. These components also require monitoring. Without monitoring, emergency situations might not be detected in time.

For many of you, security issues are relevant. Both JMX and the Zabbix agent support the use of an SSL connection for metrics transfer. But this issue is a concern to be discussed at another time.

Ignite monitoring template based on created for this article is now available in Zabbix standard supply from version 5.4 and higher. So using Zabbix for Apache Ignite monitoring should be more convenient now.