Peter Zaitsev, CEO and co-founder of Percona, says there are several key strategic benefits of using the Apache® Ignite™ in-memory computing platform instead of Memcached, Redis, Elastic or even Apache Spark.

I had the opportunity this week to connect with Peter and ask him about this and more questions as he prepares for next month's In-Memory Computing (IMC) Summit in Amsterdam June 20-21.

The In-Memory Computing Summit Europe is the only industry-wide event focusing on the full range of in-memory computing-related technologies and solutions. The conference is attended by technical decision makers, implementers and developers who make or influence purchasing decisions about in-memory computing, Big Data, Fast Data, IoT and HPC solutions.

Percona helps companies of all sizes optimize the performance of and maximize their success with open source databases, including MySQL and MongoDB. Peter’s talk next month at the IMC Summit is titled, "Accelerate MySQL for Demanding OLAP and OLTP Use Cases with Apache Ignite." 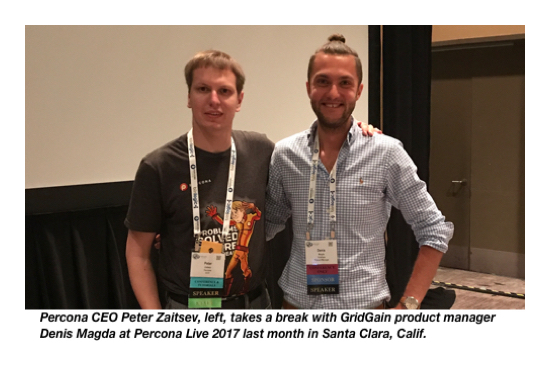 Tom: Peter, first off, thanks for speaking with me today and it's great to reconnect after (almost) a couple years. On the IMC Summit site, the introduction to your talk says that Apache Ignite was your in-memory computing platform of choice over Memcached, Redis, Elastic or even Apache Spark. I don’t want to spoil the suspense for those planning to attend your talk, but could you elaborate a little on that?

Peter: This is not quite what the talk is about. Rather I want to encourage the audience to keep their eyes open and explore new solutions such as Apache Ignite, to see if they are the right fit for their applications. Way too often people either have a tendency to just stick to “old and proven” technologies or chase the new and shiny things, while the path to the optimal infrastructure often lies somewhere in between.

Tom: Backing up a bit, when did Percona start incorporating in-memory computing technologies into its offerings? And what prompted that shift?

Peter: From very beginning really… first, while not designed specifically for in-memory computing, MySQL is very often used for it - having a database completely in memory is a known “trick” to achieve very high performance for MySQL. We also always looked at ways to help our customers to build better and more efficient data infrastructure, which often included supplementing MySQL with additional solutions - Memcached, Redis, more recently Spark - this is really what a lot of my talk is about.

Tom: As you mentioned, Percona now offers an open-source memory engine for MongoDB. When was this added to Percona Server and how is it being used by your customers and users… maybe a couple of examples?

Peter: Percona Memory Engine for MongoDB was released in August 2016. We see a lot of excitement around this storage engine, which brings Open Source in-Memory computing support to the MongoDB ecosystem. It is being used by those who need very predictable response times and higher performance than disk-based storage engines can provide. Another way we have heard Percona Memory Engine described is that it gets the performance and predictability of Redis or Memcached while having the much more powerful MongoDB query language.

Tom: Banks and financial institutions have been using in-memory computing technologies but today usage spans software/SaaS, transportation and logistics, healthcare, IoT, retail, insurance… the list goes on and on. The key drivers behind the growing importance of in-memory computing involves rapidly growing amounts of data, the rise of web-scale applications and the Internet of Things, the falling cost of RAM, and, in some cases, the impact of new regulations.

Are you seeing your own customers asking more about in-memory computing options today than say five or even 10 years ago? And are you seeing any trends?

It is interesting to see while storing data in memory has become more affordable, we also have new generation storage such as NVMe and Optane Memory, allowing for interesting hybrid architectures.

Peter: I think these are use cases for which in-memory computing technologies are designed very well. Traditionally for disk-based systems it is hard to mix the efficient processing with concurrent writes. In-memory database design removes this limitation.

Tom: What other sessions are you looking forward to attending yourself at the IMC Summit?

Thanks, Peter! See you in Amsterdam.