In Kafka a partition is a stream of key/value/timestamp records. Like any distributed system, Kafka distributes partitions among nodes to achieve high availability, scalability, and performance. Kafka Connect architecture is hierarchical: a Connector splits input into partitions, creates multiple Tasks, and assigns one or many partitions to each task. The maximum number of tasks is configurable.

GridGain Source Connector treats each Ignite cache as a partition. In other words, the load is balanced by cache: having only one cache to load data from implies non-distributed (standalone) GridGain-Kafka Source Connector operation.

In Kafka, partitions are stored in Topics (that Kafka Producers write to and Kafka Consumers read from). Thus, the GridGain-Kafka Source Connector maps data between Ignite caches and Kafka topics.

Rebalancing refers to the re-assignment of Kafka connectors and tasks to Workers (JVM processes running on Kafka nodes). Rebalancing can happen when:

Kafka Connect provides source partition offset storage (do not mix with Kafka record offsets) to support resuming pulling data after rebalancing or restart due to a failure or for any other reason. Without offsets the Connector has to either re-load all data from the beginning or lose data generated during the Connector unavailability period. For example, Confluent’s File Source connector treats files as partitions and position within a file as an offset. As another example, the Confluent’s JDBC Connector treats database tables as partitions and the incremental or timestamp field value as an offset.

GridGain Source Connector takes a cache as a partition and there is no notion of an offset that would be applicable to a cache in general. Although real life Ignite data models might have caches with incremental keys or incremental value fields, that would not be as common as in relational or NoSQL data models. A Kafka connector requiring all caches to include incremental fields would severely limit applicability.

Thus, GridGain Kafka Connector exposes different policies to manage failover and rebalancing as a compromise between performance, resource consumption, and data delivery guarantees. The options are specified with the failoverPolicy configuration option.

Any Ignite cache updates that happen during the Connector downtime due to failover or rebalancing are lost. This option provides maximum performance at the cost of losing data.

Pull all data from the Ignite caches each time the Connector starts. Always loading all data after re-balancing or failover does not violate Kafka guarantees: injecting duplicate data into Kafka is allowed. However, Ignite is designed to store really big data and performing a full data reload every time the Connector restarts is not feasible unless all of the caches are small.

Resume from the last committed offset. 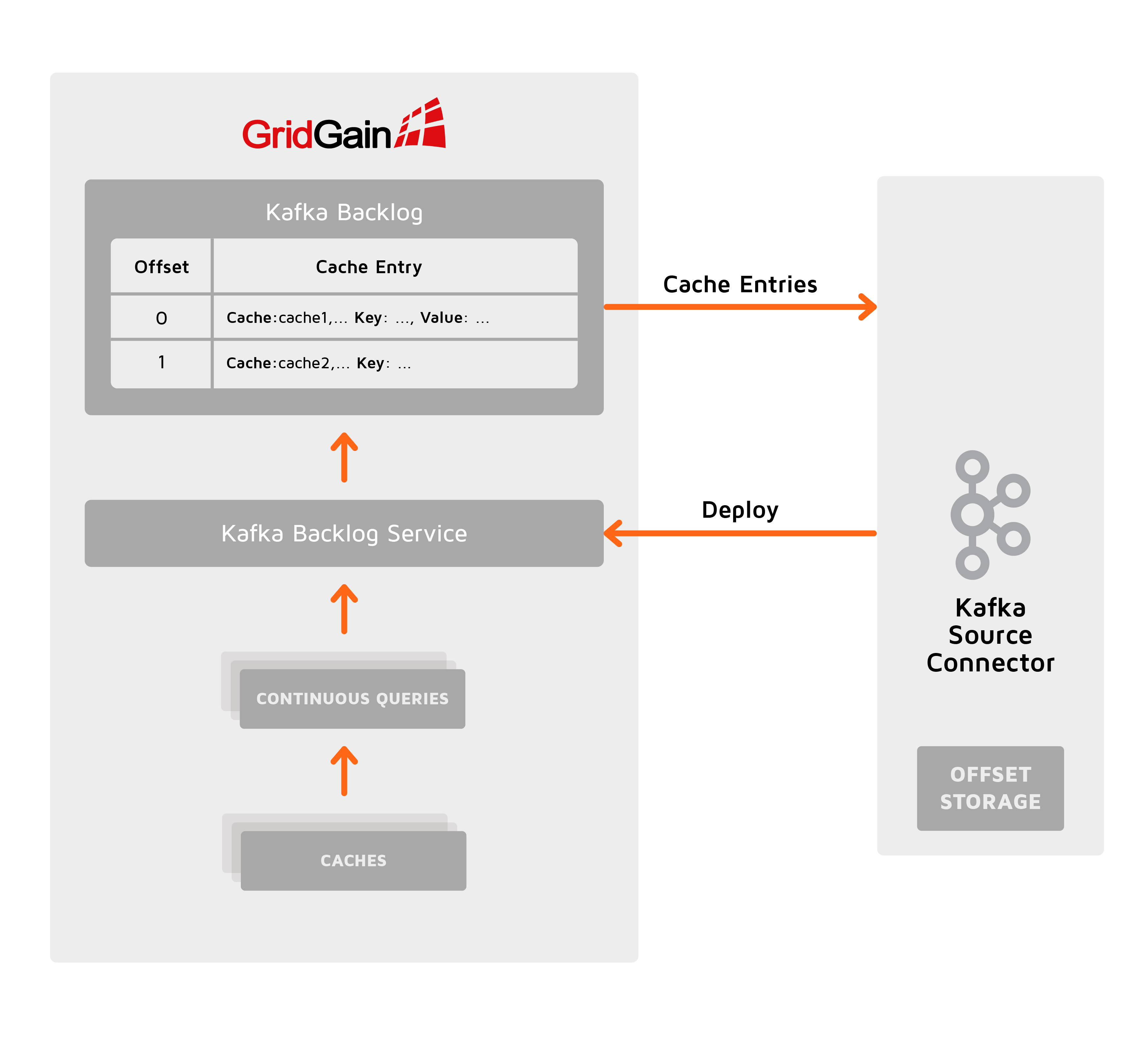 This option supports exactly once processing semantics but consumes additional Ignite resources to manage the Kafka backlog cache. This is also less efficient due to extra data marshalling and does not survive Ignite cluster restart.

When Kafka Backlog is used to manage failover, you must configure a data region in Ignite dedicated to the Kafka Backlog. Configure an eviction policy for the data region to avoid the Backlog growing indefinitely. Set data region maximum size to a value large enough to avoid losing data in the worst case scenario. To understand the "worst case" scenario remember that there is no Kafka Backlog throttling: Ignite pushes entries to the Kafka Backlog at the speed the entries appear in the source caches. The Source Connector constantly polls the Kafka backlog and injects the data into Kafka. If Kafka does not catch up with the Ignite ingestion performance or Kafka becomes unavailable, the data might be evicted from the Backlog without being injected into Kafka. Thus, the Backlog data region maximum size must be enough to keep all data streamed into Kafka at the maximum rate during the longest possible downtime duration. The default Backlog data region name is kafka-connect and you can use the backlogMemoryRegionName configuration setting to assign a different name.

Kafka Connector monitors new caches matching cacheWhitelist and cacheBlacklist created in Ignite and existing caches removed while the Connector is running. The Connector automatically re-configures itself and Kafka re-balances the work if a monitored cache is dynamically created or destroyed.

The shallLoadInitialData configuration setting controls whether to load data already existing in Ignite caches at the time the Connector starts.

GridGain Sink Connector exports data from Kafka topics to Ignite caches. The caches are created in Ignite if missing.

The Connect framework auto-commits offsets of the processed data and resumes pulling data from Kafka from the last committed offset if the Connector is restarted. This provides the "exactly once" processing guarantee.

GridGain Kafka Connector package includes org.gridgain.kafka.IgniteBinaryConverter, which serializes data using Ignite Binary marshaller. This Converter provides maximum performance for schema-less data since it is native for Ignite Binary Objects that the Connectors work with. IgniteBinaryConverter supports Kafka schema serialization and thus can be used when schemas are enabled.

Alternative converters from other vendors are available, which could provide a rich set of additional features like Schema registry with schema versioning.

Both the Source and Sink Connector allow filtering data pulled from or pushed to Ignite caches.

Use the cacheFilter configuration setting to specify the class name of a custom serializable java.util.function.Predicate<org.gridgain.kafka.CacheEntry> implementation.

Kafka Single Message Transforms (SMTs) allow configuration-based alterations of the messages structure and contents. Read the Kafka documentation to learn how to configure the SMTs.