Throughout my IT career, I have sometimes heard about cases where colleagues needed to travel for business meetings to far away locations just for a day. At the beginning of my IT career there was even a case that I heard about where a senior manager was nearly on a Concorde flight from London to New York because of an emergency situation. This kind of thing never happened to me, until April 2018! Concorde stopped flying a while back, but a day trip from London to New York is almost possible.

My colleague Dmitriy Setrakyan was scheduled to give a talk at the New York City In-Memory Computing Meetup on Thursday 26 April. Unfortunately, due to other commitments, he could not do so, and I was asked to present at the meetup instead. I knew that Dmitriy's shoes would be very hard to fill, but I would do my best.

I flew out from London Heathrow Airport early morning on Thursday 26 April, arriving into Newark Airport about 8 hours later and early afternoon New York time. Unfortunately, Newark Airport is not widely equipped with automated immigration systems, and so I waited a long time to clear immigration before heading into New York City. I arrived at the meetup location with time to spare. The event took place at WorkHouse NYC, 21 West 46th Street.

The meetup featured speakers from VoltDB, GridGain and Oracle. Dheeraj Remella from VoltDB was scheduled to speak with Mike Stonebraker. I represented GridGain. Doug Hood represented Oracle. I was looking forward to meeting Mike Stonebraker again, as I worked for his CTOs office at Informix many years ago. Sadly, though, Mike was unable to attend.

Dheeraj kicked off the meetup with a great talk about VoltDB and its suitability for modern processing requirements. I noticed that Dheeraj used a small number of slides. I have often heard it said that a good speaker does not need many slides, and slides should contain simple points to act as reminders.

I was up next and focussed on Hybrid Transactional/Analytical Processing (HTAP), comparing Apache Cassandra and Apache Ignite. I briefly covered some of Cassandra's strengths and weaknesses and highlighted areas where Ignite could help overcome Cassandra's weaknesses. This approach fitting the no-rip-and-replace philosophy that is a business benefit of using Ignite.

The final talk was by Doug Hood. Doug focussed on how to tune TimesTen Scaleout and showed some demos. From my previous work in Database Performance Benchmarking as part of my Doctoral Research during the 1990s, I knew only too well the value of tuning.

The overall attendance at the meetup was great. Unfortunately, it was too popular for the venue and many attendees had to stand, as shown in Figure 1. 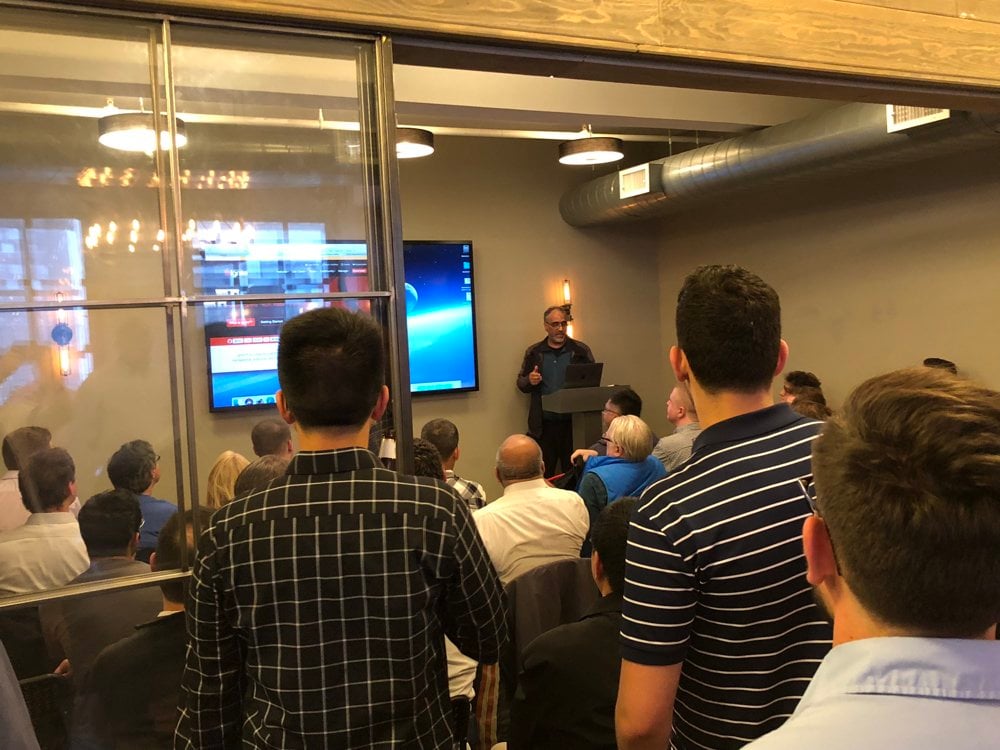 My colleague Tom Diederich, who started the NYC-IMC meetup group, has done a great job growing the group to nearly 700 members, as I write this blog post. It is clear that there is great interest in this subject. Tom is always on the lookout for new speakers for the IMC meetups around the world and if you are interested in speaking, please complete this form. At the end of the meetup, Tom did some raffle draws.

After the meetup, some good informal discussions with attendees and colleagues and then I headed to my hotel. Next morning, an early departure from Newark back to London. The flight was shorter at about 6 and half hours. I arrived back in London around 8:40 in the evening on Friday 27 April. Not quite one day, but close enough.

Meetup food and beverages were sponsored by GridGain.