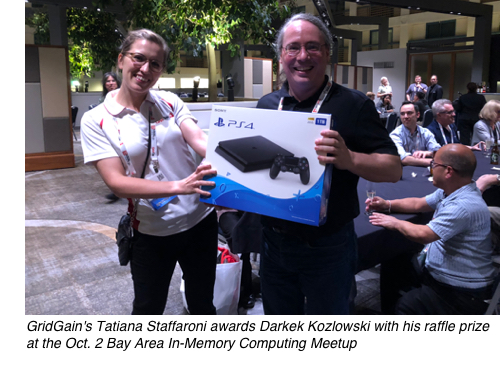 Autumn is in the air – and so is Akmal. Our London-based technology evangelist will be flying to speaking engagements in Brussels, Luxembourg and New York City over the next couple of weeks.

But Akmal won’t be the only GridGain expert speaking at meetups: GridGain senior consultant Lucas Beeler will preside over a hands-on workshop for Java developers at the Silicon Valley Java User Group on Oct. 17. And lead architect Val Kulichenko will be the featured speaker at the Oct. 25 DevOps Exchange San Francisco Meetup.

And from October 19-20, GridGain will take part in the biggest Russian Java Conference - Joker. Head architect Alexey Goncharuk and architect Vladimir Ozerov will be there representing us and talking about Apache® Ignite™, too.

Rob Meyer, head of outbound product management, will end the month with a webinar on October 31.

But before we go into the details, I’m proud to announce that the NYC In-Memory Computing Meetup is 1-year old and has 998 members! Just two more for 1,000. A huge thank you to Akmal and Denis Magda (Akmal’s boss and also our director of product management) for making that happen through their many detailed talks about Apache Ignite and GridGain.

OK, here’s a look at the next couple weeks.

(and read about his previous week's meetup tour here)

October 17: GridGain senior consultant Lucas Beeler will preside over a hands-on workshop for Java developers at the Silicon Valley Java User Group on Oct. 17. The workshop, which is free and open to all, will be held at the Google Campus in Mountain View, Calif. from 6-9 p.m. RSVP required. Read More

Meanwhile, back in Europe, Akmal will have just completed his 117 mile train trip….

Akmal won’t have much time to rest. It’s off to the Big Apple for three meetups! Another 3,500 miles added to his passport.

October 23: Akmal will begin his NYC meetup tour at the Metis: New York Data Science Meetup. His talk is titled, "Apache® Ignite™: The In-Memory Hammer In Your Data Science Toolkit." This talk will also be live-steamed. Read More

October 24: Akmal will be speaking at the Future of Data: New York Meetup alongside Gabriel Jimenez, an infrastructure developer at Bloomberg. Akmal’s talk is titled: "Powering up banks and financial institutions with distributed systems."  And Gabriel’s talk is titled: “His talk is titled, "Introducing Big-SQL: Apache Ignite + Apache Phoenix on Spring Boot."

Attendees will be mainly data scientists working at banks and financial intuitions.  Akmal will introduce Apache Ignite’s distributed memory-centric architecture that combines the performance and scale of in-memory computing together with the disk durability and strong consistency in one system.

When native persistence is turned on, Ignite functions as a memory-centric system-of-record, where most of the processing happens in memory on cached data, but the superset of data and indexes gets persisted to disk.

When persistence is turned off, Ignite functions as a memory-only store, in which case it can be treated as a Distributed Cache, In-Memory Database (IMDB) or In-Memory Data Grid (IMDG).

October 25: Akmal will be speaking at the NYC In-Memory Computing Meetup! I think we’ll have well over 1,000 members to the group by then. His talk will be titled: "Powering up banks and financial institutions with distributed systems." Also speaking that evening will be Kevin Goldstein, Principal Architect at Neeve Research, and Marco Mankerious, solution architect at Redis Labs. Read More

October 25: Val will also be presenting that same evening – but some 3,000 miles away. He’ll be the featured speaker the DevOps Exchange San Francisco meetup. His talk is titled, "Distributed Database DevOps Dilemmas? Kubernetes to the rescue! Read More

October 26: Moscow In-Memory Computing Meetup. This special morning edition meetup is designed for IT-managers and decision-makers who want to learn more about in-memory technologies and also hear about some real-word use-cases.

If you or someone you know would like to speak at your local meetup (or an IMC Meetup) about Apache Ignite, please fill out this speaker request form and I'll be in touch shortly.

GridGain will be covering two huge Java conferences between now and Halloween: Joker and JavaOne (actually, it’s now called “Oracle Code One” and billed as “the Event for All Developers”).‎

Vladimir will be on booth duty, talking about “open source, enthusiasm, money and why large corporations want their products to become open source.”

On October 20, Alexey will lead a session titled, “How we broke Ignite adding persistence (spoiler: and fixed). If you already have a ready In-Memory data grid, how difficult can it be to add distributed persistence to it and save all data locally? In our short story we will cover the obstacles (the obvious and not so obvious) that we met when added the native persistence to Apache Ignite. Read More

October 22-25: Oracle Code One (the conference formerly known as JavaOne). Visit us at Booth 5601 and say hello! Our experts will be there to answer questions – and ask a few, too. Plus you’ll get a cool free gift!

Digital transformations, he explains, are arguably the most important initiatives for companies. “They can literally make or break a business, Rob said. “But transformation is not easy because there’s a big digital divide between the speed, scale and computing needed for new digital channels and APIs, and what existing systems can deliver.”

Learn how leading digital innovators have solved these problems by using in-memory computing, and the roadmaps that worked for them. Register now (that link will also work for playback afterward).

That's all for this update. See you next time!