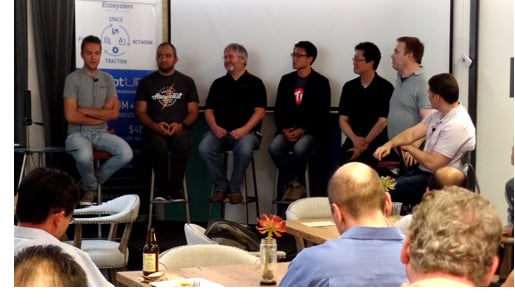 Summer begins today but things are not slowing down here on the community front!

Denis Magda, director of product management and Apache Ignite PMC chair, sat on the panel. That's him to the very left; Rob is to the very right.

This week Akmal was once again in Germany, but this time speaking at Hamburg  Container Days conference, which ran June 18-20. His talk focused on how Kubernetes can orchestrate a distributed database like Apache Ignite -- details here.

Yesterday, Denis led a webinar titled: “Building New Hybrid Transactional/Operational Processing (HTAP) Applications With Apache Ignite. It was the second in a series in his in-memory computing best practices series. Part 1 was titled Adding Speed and Scale to Existing Applications with No Rip and Replace Using Apache Ignite. Both were recorded and you can access them via those URLs.

And next week is just plain busy!

The In-Memory Computing Summit Europe kicks off Monday in London. The two-day conference is the only in-memory computing event that focuses on the full range of in-memory computing-related technologies and solutions. If you haven’t obtained your ticket yet, grab one for just £20 by using my promo code Tom20. Register here.

Then join me across the street from the venue at the Brass Monkey Pub for the In-Memory Computing Community Mixer. Free drinks and food but an RSVP Eventbrite ticket is required since space is limited.

On Tuesday, as the #IMCS conference continues across the pond, Denis will be preparing for the first of three meetup talks in the Big Apple.

That’s a wrap! Be sure to follow the In-Memory Computing Summit (@IMCSummit) on Twitter to keep up with all of the news from the conference and use the hashtag #IMCSummit if you’re tweeting from the event.

And in case you'd like to catch last week's panel discussion, it's on the GridGain YouTube Channel.