As a frequent attendee and speaker at developer conferences, meetups and other high-tech events, I'm always bombarded with the questions about the distinctions between Apache® Ignite™ and Apache® Cassandra™. It's not surprising to get them because both databases have many things in common such as horizontal scalability, high availability and durability. My previous four articles in this series outlined the main differences from architectural and development standpoints:

Since Ignite supports full-fledged memory-centric storage, benchmarking it and Cassandra can't be viewed as an apple-to-apple comparison. Ignite's store can hold terabytes and petabytes of data merely in DRAM while Cassandra's in-memory options are limited. But, for the sake of curiosity, we decided to check the performance numbers and share it with you.

Let me quickly share the details about the benchmarking environment, along with Ignite and Cassandra configuration parameters. Nothing is exciting in this section; it's just a must-do for articles like this one.

Initially, the benchmark simulated small loads by accessing Ignite and Cassandra with 32 application threads. The picture below shows the final measurements: 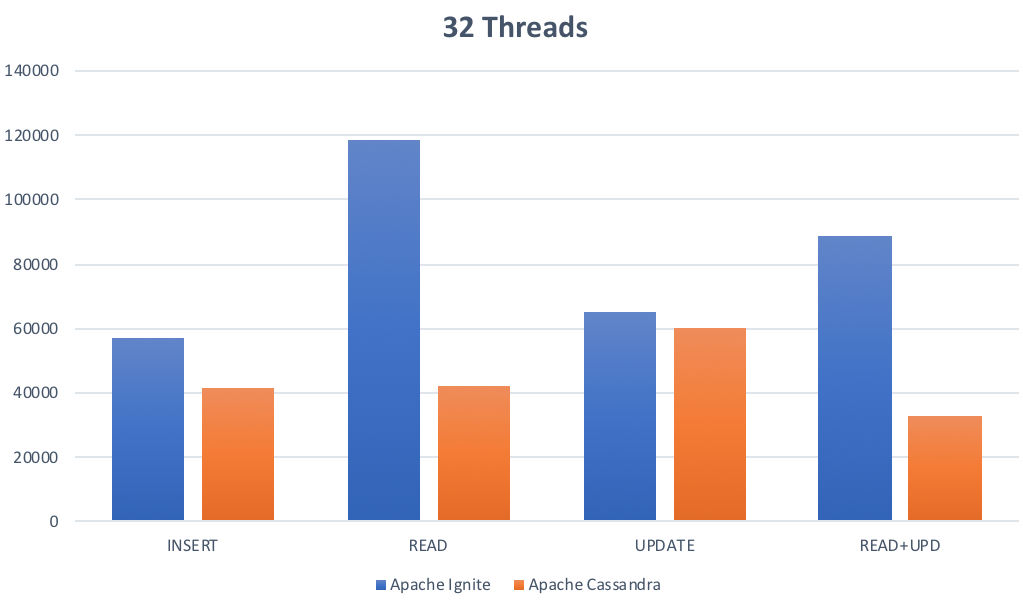 The Y-axis represents operations per second, and the X-axis shows types of measured operations. Overall, this specific benchmark suggests that:

Next, we went ahead and added a tougher workload by accessing the clusters from 256 application threads in parallel: 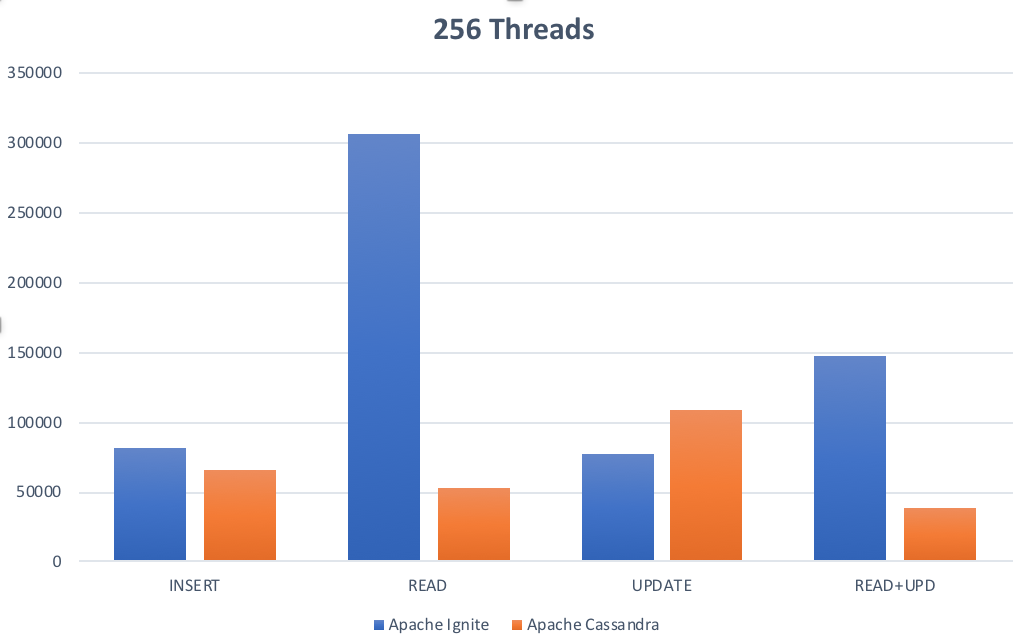 The overall result changed positively for both databases:

If performance requirements and brutal SLAs drive your final decision, then Apache Cassandra is a good candidate for write-intensive applications under a high load. Apache Ignite, on the other hand, can exceed expectations of mission-critical deployments with heavy read or mixed workloads.

Moreover, as a summary of the whole series, it's fair to say that though the performance influences our final decision a lot, there are other factors that we always take into consideration. For instance, those who prefer Cassandra for write-intensive workloads are ready to sacrifice strong consistency with distributed transactions, ready to work with denormalized architecture and forget about advanced querying capabilities of SQL. At the same time, if you need any benefit Ignite offers over Cassandra (simplified architecture, strong consistency, collocated processing and SQL, in-memory speed), then it's logical to consider Apache Ignite for the write-intensive workloads as well since, as benchmarks confirmed, both databases show comparable numbers for mid-size write workloads.

Finally, this article and benchmarks are dated by March 15, 2018 -- so who knows what to expect from both databases in terms of performance in the future.